Try out the game on Itcho.io!

This game was also featured on the Unreal student showcase fall 2020: Showcase

Levis Umbra is a stealth game where you must navigate an old mine operated by mining robots that may have gone haywire, you task is to navigate through the mine avoiding the robots and try to figure out why the robots are defective and hostile.

My main responsibility for this game was to create a hostile robot AI that would attack you on-sight. Without any previous knowledge on AI this was a difficult but doable task, luckily Unreal provides most of the necessary components to make the AI come to life. This includes the core part of the AI; The perception system, this system allows AI in Unreal to get a baring of what is around them.
All the code was done in Blueprints because we were on short time and we did not want the designers or artists to compile and such.

The perception system of Unreal operates with the knowledge that every pawn has a perception stimuli source (you can turn off that every pawn acts like a source and add it manually) that acts as the “tag" for the AI to know what causes a sight, sound or touch event.


Video of perception system in action

A quick note on what is happening in the video: as shown the AI has circle around them this indicates each sense that an AI can perceive (noted in the top left), my AI uses sight and hearing where if the player walks into the sight radius a red orb will be shown indicating the last/current position the AI has perceived something.
Each AI also has a direct line-of-sight cone that has a certain range where if the player enters that cone, he/she will be immediately detected (in the video I made the cone very small for example sake).

This blueprint snippet is how Unreal gives back the sensed actors I use those sensed actors to determine next on what to do with them using the function Check Stimuli.

This snippet shows the Check Stimuli function that first checks on what to do with each actor and if they are part of the same team or the opposite team. I then break up the actual stimuli struct to get all the data I need to see what we are dealing with. At the end you can see a check for the “noise" tag this is how you can split of the different senses of the AI. 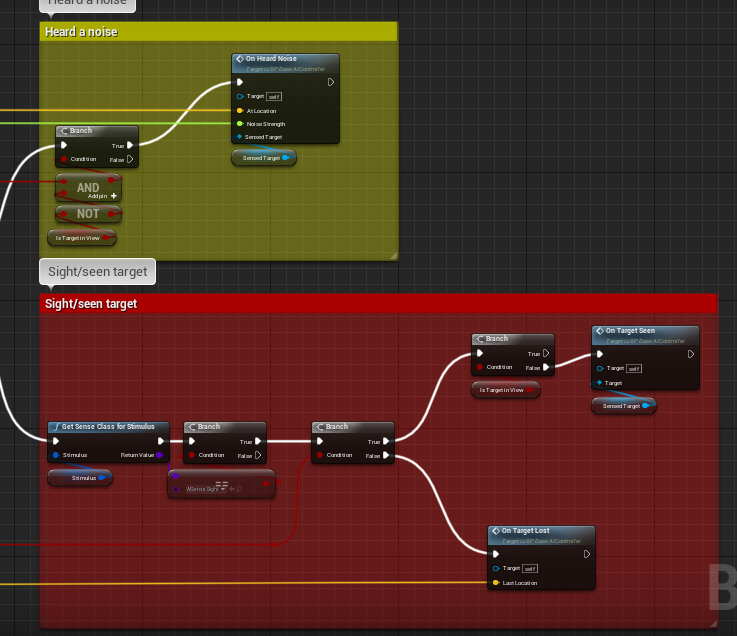 This snippet shows that at the end of the function it determines how it should handle the different senses, for noise it will call On Heard Noise and will handle it further while with sight it will see if the target is already in view if not we have now seen it and if the sense is lost it means we have lost the target.

For the AI's behavior I used the behavior tree system from Unreal I tried to keep everything that has to do with the AI's behavior in there and try to make it modular in a sense that you can swap out certain behaviors for others or add new ones. 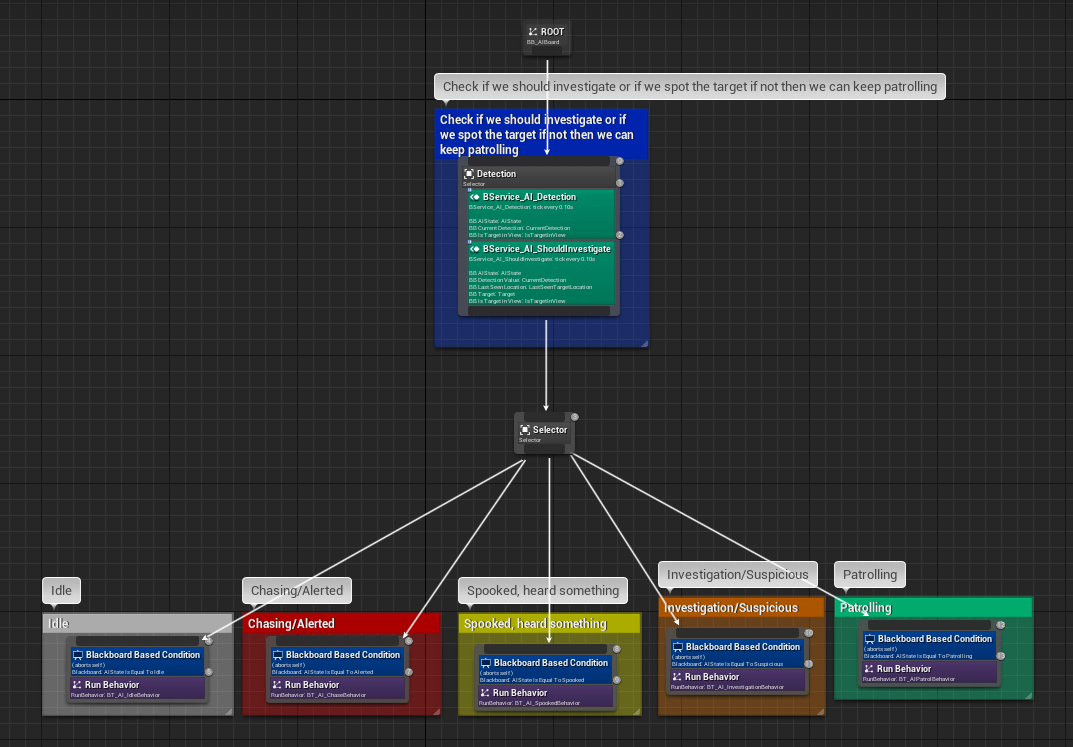 The actual behavior tree for the medium AI (the AI shown in the videos and in-game) the AI has 5 different states depending on what is happening in-game by default it will go-to idle. 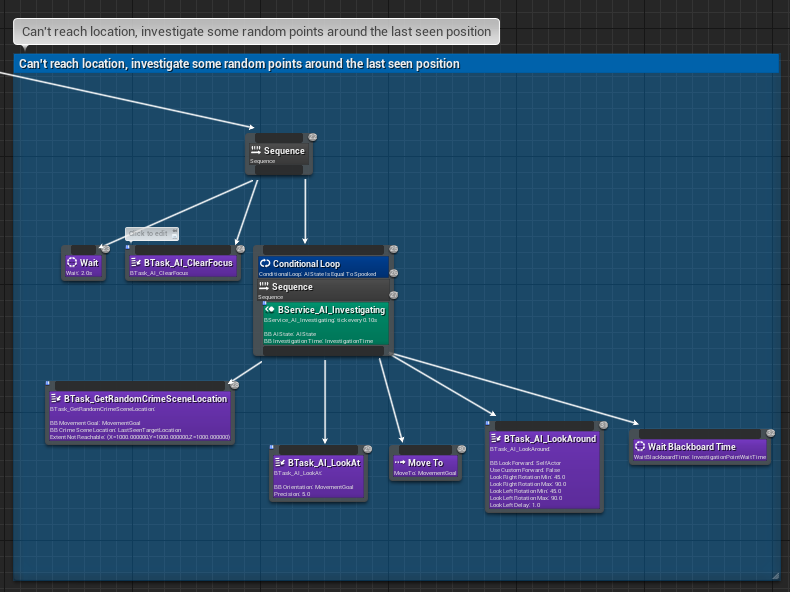 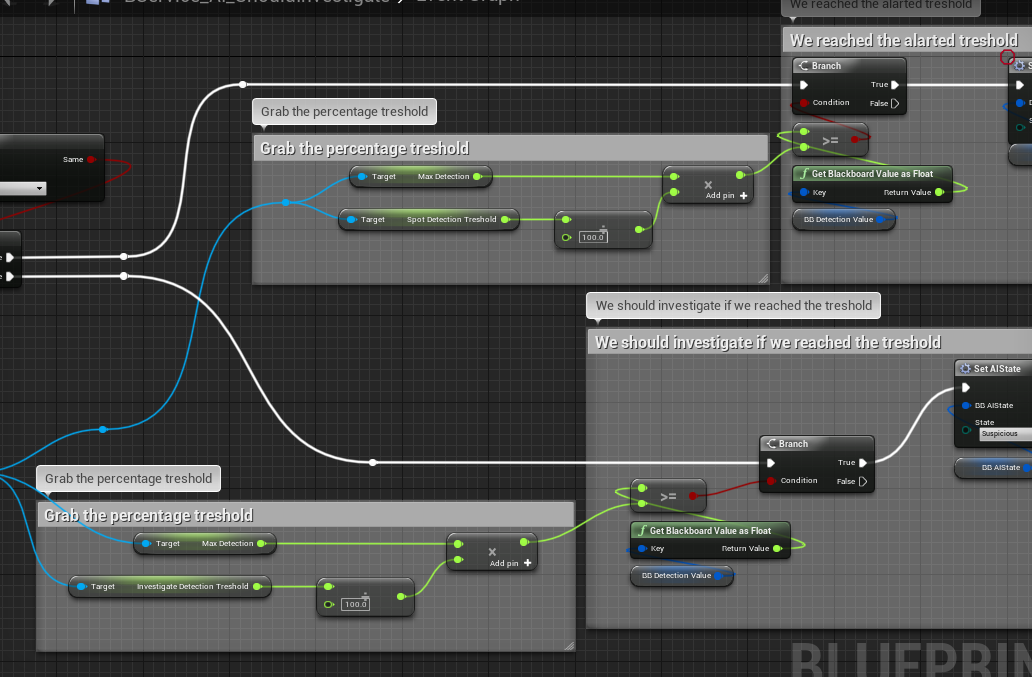 This snippet shows that the behavior tree handles the detection of the player based on thresholds and sets the AI in different states based on what does threshold are set to.